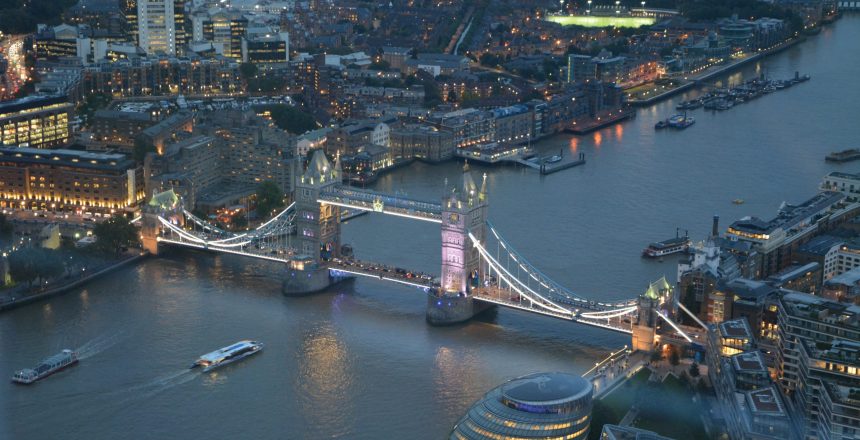 Are we heading into a period of inflation or deflation? This is the question that might not be at the front of every investor’s mind at the start of 2022. Due to the substantial effects on assets, especially property, this is something that should be considered. At Global Residential, we wanted to help you understand why inflation is an investors best friend and how you can use it to your advantage.

Inflation: What is it?

Inflation is the rising price of good’s and services over time, measured by the consumer price index (CPI). A representative “basket” of products is used for the calculation. When using the bank of England’s target inflation rate of 2%, if that was achieved, costs of goods and services increased on average by 2% over the past year. In order to maintain economic growth, the Bank of England has set up this target to encourage consumers to spend their money, rather than wait for prices to fall, which would lead to deflation.

It is also important to understand asset price inflation, which is the rising price of assets that are not included in the typical “basket” of goods. Items such as gold and property are examples. Finally, monetary inflation refers to the increase in money supply in a country as a result of quantitative easing.

“Quantitative Easing (QE) is a type of non- traditional monetary policy in which a central bank buys a large number of securities to stimulate the economy. When QE works well, the increase in the money supply encourages lending, lowers interest rates, and results in economic growth.” QE or “printing money” leads to inflation because of the loss of purchasing power it causes for your currency. Purchasing power is the amount of goods or services that can be purchased with a unit of currency. In the graph below, you can see how the purchasing power of £100 has devalued over time because of the effects of quantitative easing and long-term inflation. 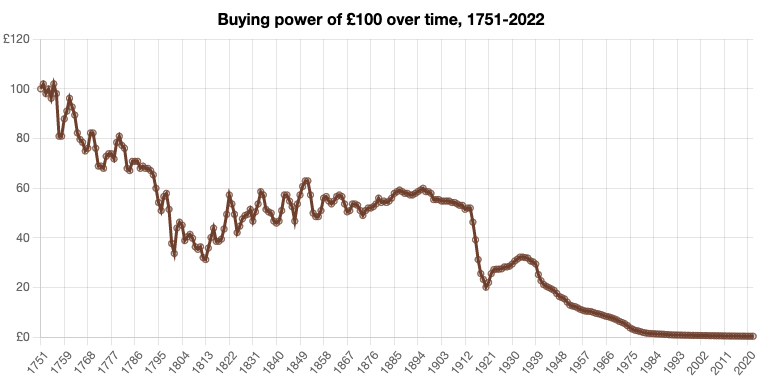 The graph above represents the value of goods that could be bought with £100 over time. As an example, £100 in 1914 would have the purchasing power of 85p in 2020. That’s a £99 depreciation over this time frame! Several factors influence this, mainly because as more ‘pounds’ are injected into the economy, the increased supply of money generates demand for spending and therefore the price of goods increase. Even in our lifetimes, “the equivalent of £100 in the year 2000 would now buy you £56 worth of goods today”. This emphasis the importance of understanding inflation and how it affects your wealth.

So, let’s look at a more recent comparable. How inflation has affected our purchasing power over the last 10 years.

Consumer price inflation has been 31%, meaning compared to 10 years ago, your £100 would now be worth £69. However, house prices have increased on average by 63% during the same period. Therefore, rather than losing purchasing power because of inflation, you would have gained by 32% if you had invested in property instead.

Investing in property historically has this kind of power for the market, which is why it has made more millionaires and billionaires than any other asset combined! Usually, property prices rise in tandem or even outpace inflation, as they have on average since the 1970s by nearly 2%.

To summarize, you would have a property asset and rental income that would rise at least in line with inflation. In addition, the debt is eroding in value due to declining purchasing power over time.

Several factors affect short-term inflation, but supply and demand have the most influence. When supply falls and demand stays the same, prices will rise since the same number of people are competing for fewer goods. If the demand for a product increases while the supply stays the same, then the prices will also rise since more people are competing for the same amount. So, what has been happening in the UK recently and how will it look in the future?

Since the pandemic, we have witnessed chaos in supermarkets. Shortages of stock even in loo roll are just the beginning of the problems we have seen. The supply chain issue is going to continue. As Brexit effects play out and we transition into a new period of importing goods from elsewhere. There has also been a reduction in the number of workers, especially lorry drivers, since the pandemic began. This has led to a shortage of goods and produce being imported into the country because we do not have enough staff to support the demand.

Another reason that inflation is expected to rise in 2022 is one of the long-term causes discussed earlier. Quantitative easing. After the 2008 financial crash, quantitative easing was a major policy for getting the economy back on its feet. Between 2008 and 2016 there had been £445bn of quantitative easing, in 2020 alone there was an additional £450bn. Mainly because of the furlough scheme and other factors caused by the pandemic. This cash injection into the economy over such a short period of time will increase the rate of inflation moving forward.

Based on the research and data above, this should highlight the importance of protecting your money against inflation. We believe that investing in UK property for the medium to long term is the best practice to use inflation to your advantage and increase your asset wealth.